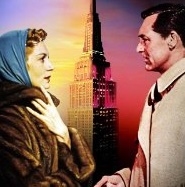 John's love for her began before he knew who she was. It was the mere idea of her that created the love that he had in his heart.  There was nothing to compare to it. He longed to share his life with the idea of her.

His longing for her ran deep. It would remain on his heart and in the back of his mind continuously.

Then the one day, after all his searching, he met Beth.  He knew without a doubt that he had encountered the "one".  She was all his heart had hoped for and so much more. She would be the one that would complete him and make him fulfilled and satisfied. The longing and emptiness would finally be filled.

Unfortunately, she was not easily convinced. She had come to believe that her happiness would come from her independence, personal pursuits, gaining personal fame and glory for herself.  All Beth would give John was friendship and kindness. She relegated him to a place of consultant in her life when she needed him.  He would try to give her advice and even warn her at times of unhealthy connections only to be met with her look of scorn.

Although he longed to hold that special place in her heart, he would settle for being a part of  her life as her friend.

For years, John watched as Beth would go from one relationship to another. Always, choosing the wrong guys. The way she chose them was so bizarre to him. He would observe as she would be drawn to the bad boy, the star athlete, the emotionally aloof guy, or any guy that just needed her to rescue him and reform him by her love.

It was so painful for him to watch, and he could see how each one of them would never be worthy of her. Eventually each guy would wound Beth and break her heart.

As he would watch season after painful season, the only thing John could count on was that each one would drive her back to him. He was the faithful friend that was there to pick up the pieces when the bad boy broke her heart because he dumped her for another (because that's what bad boys do; that's why they are called bad boys). He was there when the star athlete never had time for her. He was there when she realized the emotionally aloof guy made her feel more alone when she was with him than when she was by herself. He was there when the guy who needed to be rescued didn't want to be rescued, and she couldn't handle his unhealthy behavior any longer. He was always there for her.

John also saw that with each painful relationship a little piece of Beth was tarnished. She developed unhealthy attachments, behaviors and desires. The sweet purity and innocence of Beth was fading.

He ached in his heart as he watched her make one bad decision after another; season by season and year by year. Every year she spent chasing after these failed pursuits was one less year they would have together; one more year wasted. He knew that what she was longing for was right in front of her, and all she had to do was accept it and say yes. Oh it was so simple but yet, what was it that drove her to this mindless and empty pursuit? Why was she so determined to go after all of these options that brought her so much pain and emptiness, when love is waiting right in front of her.

John's love for Beth is available to her at any time she chooses to receive it. He is even willing to forget all of the other guys, all the wasted years and start fresh. All she has to do is turn around and agree with John in order to be happy.

What makes Beth so determined to go after all of the other guys?

We want this story to have a happy ending, but Beth gets to choose how it will turn out. It is up to her to continue down the path that not only causes her pain, but also the path that she thinks will satisfy her longing, make her happy and remove her loneliness.

As you read this story, what do you think she will choose?

Will there come a point where she surrenders to John and finally enters into a relationship with him?

Will she instead, keep him at a distance in the friend zone; only consulting with him when life is just too painful?

Will John ever leave her, stop longing for her or finally give up on her?

This story demonstrates the heart of God toward man, but it also demonstrates man's heart toward God. We run after our own gods. We pursue all the things that we believe will fill our void and make us happy. We chase after the things of this world and relegate God to a place of bystander and consultant on an "as needed" basis just like Beth does to John.

We see the great love that John has for Beth, but the greatest love story ever written is in the Bible. It is a story of unaltered love and sacrifice to a "Beth" that will never be fully faithful. A "Beth" that will chase after other loves.

The story from beginning to end, is a beautiful story about a loving and perfect God who longs to be with his creation even before they are born. He has such a strong desire to know them and be known by them. He longs to connect with His creation. He created mankind to be a witness of His existence, to connect in close communion with Him to produce intimate togetherness and oneness. The relationship is intended to meet all of our needs, to satisfy our desires and to make life worth living.

This is why  we were created. Yet often, we choose to go it alone, or do it our own way. Just like John and Beth, what we are looking for is right before us, and all we have to do is accept it and say yes.

The Bible is a story of God and man. God being perfect, man being imperfect. However, the imperfection of man is the very thing that separates him from a perfect God.

Throughout the stories, the common theme is God and man together. God sets parameters and warns man of the dangers for man's sake, man doesn't believe God, man does what he thinks is best, and man and God separate...  Man realizes that God was right, begs for reconciliation,.. so the cycle repeats.

But through it all, the deficiency and inadequacy was always within man. The perfection and completeness was within God.

The story of redemption throughout the history of mankind and God is that man cannot remain in relationship with God without God. God has to equip, enable, and establish him.

We are flawed and imperfect, but a perfect God wants and desires to be in a relationship with us. We are His Beth and He is our John. John was ready to do whatever it took to be with Beth, but Beth had to be willing.

God is willing and scripture says that He wants all to come to repentance and that none would perish. It also says that if you believe in your heart that God raised Jesus from the dead and confess with your mouth that Jesus is Lord, you will be saved. We believe with the heart and it is counted as our right standing with God, and we confess with our mouth resulting in our salvation.

So the imperfectness of man is made right by God so that we can be in that perfect relationship, we can commune with God as we were created to do, and the Holy Spirit will dwell richly within us and in essence we will be one with Him.  His thoughts will be our thoughts.  Our minds will be transformed so we will be able to know the will of God.

It is truly the sweetest love story ever told.  He loves us so much that He made a way for us to be together even with all of our imperfections and sins.  All that was falling short of His standards in us, He made up the deficit Himself.  He was willing to pay for our deficiency in order for us to be united in relationship with Him. He did it by sacrificing His only son who was a perfect spotless lamb. His blood was shed and poured out to cover our deficiency. That was the payment, and it is done; finished. The blood is enough to cover all our deficit so that we can be united with God in wholeness as it was designed to be. He knows that He is what we need and that He is best for us.

So what makes us so determined to go after the things of this world instead of God?

We all need this story to have a happy ending, but WE gets to choose how it turns out. It is up to us to continue down the path that not only causes us pain, but also the path that we think will satisfy our longings, make us happy and remove our loneliness. Oddly enough, the world never delivers on its promises. We end up more dissatisfied, unhappy and even more lonely than before.

What will you choose?

Was there a point in your life where you surrendered to God? Or will there come a point where you will surrender to God and finally enter into a relationship with Him?

Will you instead, keep Him at a distance, chase after the things of this world and relegate Him to a place in your life where you consult with him when life is just too painful or on an "as needed" basis.

Will God ever leave us, stop longing for us to choose Him, or finally give up on us? The answer is ... No and Yes! Eventually He will but it will be "ONLY WHEN WE ARE DEAD!"

Just like John and Beth, what we are looking for is right before us, and all we have to do is turn to Him, accept Him and say yes. 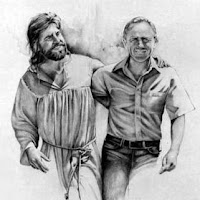 Remember: The Greatest Love Story ever told is in the Bible. It is a story of unaltered love and sacrifice to a "Beth" that can never be fully faithful. But if she says yes, it is about a wonderful life of love, joy, peace, hope, and fulfillment.

Posted by Beverly Verhage at 6:18 AM 2 comments: